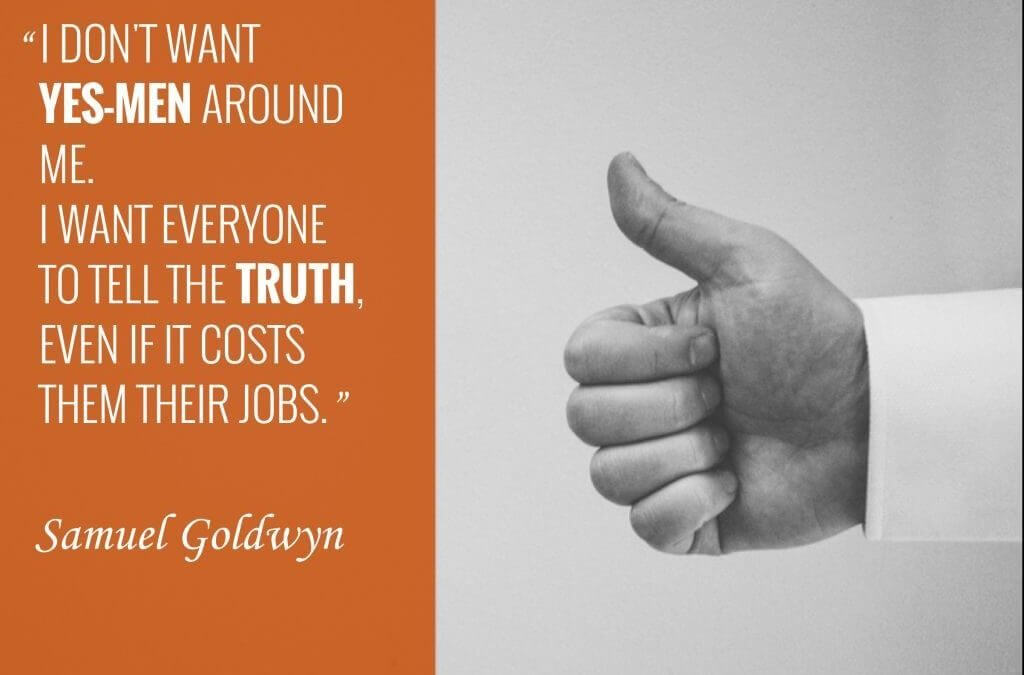 We all know that the world of business can be a pretty serious place. The good news is that there have been a number of moguls and leading lights with a great sense of humor. If you’re having a stressful day in the office, or you’re about to embark upon a to-do list as long as your limbs, here are some funny business quotes to brighten up your day, and hopefully make you smile.

“I don’t want yes-men around me. I want everyone to tell the truth. Even if it costs them their jobs.” Samuel Goldwyn

Polish-American film producer, Samuel Goldwyn, expresses the irony of running a business or being involved in a corporation where there’s a fine line between telling the truth and upsetting the apple cart. This scenario, although designed to be light-hearted in Goldwyn’s quote, is probably something many of us are familiar with.

“Being powerful is like being a lady. If you have to tell people you are, you aren’t.” Margaret Thatcher

Britain’s first female Prime Minister, Margaret Thatcher was known as the Iron Lady. Famed for her strength and drive, she also injected a bit of humor into even the most mundane of parliamentary proceedings. This quote highlights the fact that if you’re really successful, you don’t need to blow your own trumpet.

“There cannot be a crisis next week. My schedule is already full.” Henry Kissinger

Statesman and political scientist, Henry Kissinger, sums up the thoughts of almost every business owner with this witty remark. When you’re juggling a hundred balls at once, the last thing you need is a crisis to deal with.

“All generalizations are false. Including this one.” Mark Twain

Author, Mark Twain, sums up the irony of making sweeping statements. In the world of business, it’s all too common to come across generalizations, most of which are inaccurate.

“I love deadlines. I like the whooshing sound they make as they fly by.” Douglas Adams

English writer, Douglas Adams, presents a fear we all have with a twist of humor and a sense of sarcasm. There’s nothing more stressful than gearing up for a deadline that is hurtling towards you far too fast.

“If I had asked people what they wanted, they would have said faster horses.” Henry Ford

Ford motors founder, Henry Ford, provides a challenge to all those guides and articles that talk endlessly about giving the customer what they want. At the time, who knew Ford’s innovative gasoline horseless carriage would change the world?

“Get your facts first. Then you can distort them as you please.” Mark Twain

They say that in business, you should talk about facts and figures, but you can still be very selective about the way you present this information. You can leave out the figures that don’t support your message, or you can listen to Mark Twain, and distort the data to make your way look like the right way.

“If you see a bandwagon, it’s too late.” James Goldsmith

When you run a business, or you’re on a mission to establish an empire, you’ll hear people talking about the importance of setting trends and being a leader, not a follower. James Goldsmith, a financier and business tycoon, sums this up perfectly. If you’re jumping on a bandwagon, you’re almost certainly getting involved in a trend that has already been spotted by your rivals.

“Why join the Navy if you can be a pirate?” Steve Jobs

The enigmatic co-founder of Apple, Steve Jobs, questions the excitement of routine and following in the footsteps of others, suggesting an alternative path for those keen to make it to the top while enjoying the climb a little more.

“Never try to teach a pig to sing. It wastes your time and annoys the pig.” George Bernard Shaw

In life, we’re encouraged to play to our strengths, and as an employer, you’re urged to assign jobs to employees with the skill set to match. As George Bernard Shaw alludes to, there’s no point in trying to force somebody to do something they don’t want. They won’t enjoy it, and you’ll be wasting your time.

“By working faithfully eight hours a day you may eventually get to be the boss and work twelve hours a day.” Robert Frost

Most of us have ambitions to climb the career ladder, but often, as American poet, Robert Frost, points out, getting to the top means devoting even more of your precious time to work.

“Success is going from failure to failure without loss of enthusiasm.” Winston Churchill

As a man who battled constant criticism and some of the most turbulent political times on record, Winston Churchill knows a thing or two about success and failure. If you can bounce back and not lose hope or enthusiasm, you have every chance of getting the results you want.

“If at first you don’t succeed, try, try again. Then quit. There’s no point in being a damn fool about it.” WC Fields

Most successful people have been rejected along the way, but sometimes, you have to know when it’s time to throw the towel in. There’s a limit to how much rejection one soul can take, and if you’ve already tried and tried again, it may be time to work towards a new goal.

“The best way to appreciate your job is to imagine yourself without one.” Oscar Wilde

Do you ever look up at the clock, notice that it’s 9pm and wonder why on earth you’re still at work? If you ever have those moments, take Oscar Wilde’s thoughts on board, and ask yourself if life would be better without that job.

“Success means only doing what you do well, letting somebody else do the rest.” Goldstein S Truism.

In business, you can often measure success by the amount of time you can devote to doing things you actually enjoy. If you get to this stage, it usually means that you’re the boss, and you can delegate all the tasks that don’t interest you to others.

Getting anywhere in business requires hard work and determination, but sometimes, you have to make time for a bit of fun. If you’re having a stressful time trying to build your empire, hopefully, these quotes have inspired you, and most importantly, given you something to smile about.